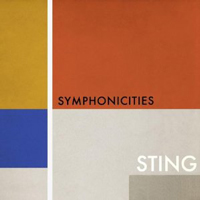 “Vintage rockers turning to orchestras for new takes on their music has become a firmly established trend over the past few years, and in all honesty it hasn’t always been a welcome one. But I’m happy to report that Symphonicities, the new album of Sting’s music seen through the classical lens of the Royal Philharmonic Orchestra, isn’t just another attempt to rehash memorable songs from years ago. Instead, it’s a new look at the great works of a great artist, filled with (for the most part) strikingly unusual, challenging arrangements which push the boundaries of the songs to which they pay tribute.”

In some cases this enhances the song’s original effect: the arrangement of “Englishman in New York,” for instance, which broadens the impact of the song’s light-hearted, dancing playfulness, or “When We Dance,” which lets Sting’s voice soar, as only it can, over the lush accompaniment which I always imagined listening to the original version. In other instances it redirects the song in striking ways–like in “Every Little Thing She Does Is Magic,” where the joy of the original, strengthened by the strings, is now underlined with the wonder of newly discovered love by brilliant use of brass, the trumpet line drawing the vocals along with it. And some songs not on the CD, which I was fortunate enough to catch at the live performance at the Met a few weeks ago–like the astonishingly re-envisioned “King of Pain,” which takes a iconic piece and fortifies its brooding sound with a dark, driving energy which I certainly never heard in the original, or the weighty, forceful take on “Russians” – are revelations. Not everything works perfectly here–I wasn’t a big fan of “She’s Too Good For Me” to begin with, and this arrangement seems to be trying to force-feed energy into the song–but this is a relatively minor misstep on an album which doesn’t have many.

The mark of a great song, indeed any great work of art, is its ability to stand not only on its own, but to be responded to, expanded upon, challenged, redefined, and made new by those who come afterwards. And the mark of a great revision is its ability to both enlighten the old and open vistas into the new. There’s a reason that Hendrix was so drawn to Dylan’s “All Along the Watchtower,” and a reason why Dylan never saw the song the same way after hearing Hendrix’s version of it. This is a lot more than vintage wine in new bottles; it’s top flight work from a great songwriter and a masterful arranger. It’s well done from both, and well worth your time.

And while you’re settling back for an evening of nostalgia mixed with new, why not accompany your musical journey with a glass of Kenwood Jack London Vineyard Cabernet Sauvignon 2005? A blend of 88% Cabernet Sauvignon, 9% Merlot, and 3% Syrah compose this red wine. Wine News rates this 91 points, commenting that it has “Powerful scents of plum, black cherry and thistle. Rich flavors of cherry pie, brown sugar and blackberry. Full, refined tannins and lingering impressions of blackberry and brown sugar in the close.” At only $19.99, this is a lot of wine for the price; on the musical side, the same could be said for Sting’s latest venture. We hope you enjoy the mixture of both as much as we did.