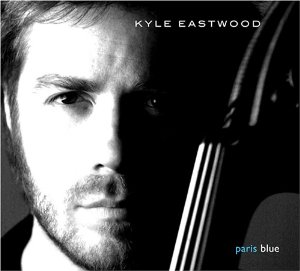 With the release of Kyle Eastwood’s “Paris Blue” comes one of the most anticipated jazz albums of the year. In the follow-up to his 1998 “From Here To There,” Eastwood emerges as one of the most versatile jazz musicians of his generation.

“Paris Blue” combines hard bop with modern, then mixes them with dance-funk. As a result, Eastwood establishes himself as a pioneer, helping to bridge the gap between jazz purists and patrons of club techno. Accomplished in the double bass, upright, and acoustic, Eastwood demonstrates a level of depth and understanding similar to the sounds once captured only by jazz icons Dexter Gordon, Coleman Hawkins, and Chet Baker.

“Paris Blue” is a nine track album that takes its listeners from a state of intimacy to a state of jubilee. True to the origins of jazz itself, this album is an amalgamation of swing, groove, and blues. Eastwood takes risks while making “Paris Blue,” as he integrates an array of musical genres while remaining loyal to the basic nature of jazz. Eastwood’s mastery of blending comes perhaps from the fusion that he has initiated within his own life. Refusing to be limited by the constraints of one calling, Eastwood draws from his experiences as an actor, film scorer, musician and Parisian √©migr√©. Realizing that vastness completes a soul, Eastwood layers styles on top of one another, melodically, until he satisfies his own need of capturing jazz’s impromptu essence.

Film fans from around the globe will be delighted that “”Paris Blue”” is a collaboration of family talent. After having been featured on the soundtracks of his father’s Academy Award winning movies, “Mystic River” and “Million Dollar Baby,” Eastwood turns the table by having the elder make a cameo appearance, whistling on the remix of Bob Haggart’s swing hit, “Big Noise From Winnetka.” In addition, the title track features Eastwood’s eleven year old daughter, Graylen, in a piano intro that she both composes and performs.

Traditionalists might ponder the long reaching impact of “Paris Blue.” However, Eastwood’s dedication to non-conformist self-expression will unquestionably set in motion his ability to command a transcontinental revival of today’s contemporary jazz.

We suggest you pair this amazing jazz album with a 2002 Kangarilla Road Cabernet Sauvignon from Australia. This deep, ruby cabernet imparts aromas of toasty oak and licorice and is dense and oppulent in texture. Just as Eastwood’s music is layered with depth and contemplation, the wine, in its richness and focused purity offers solemn layers of flavors to contemplate and enjoy. The Kangarilla Cabernet ends with sweet tannins and a long velvety finish as the thought provoking “Paris Blue” will leave your senses content and assuaged.