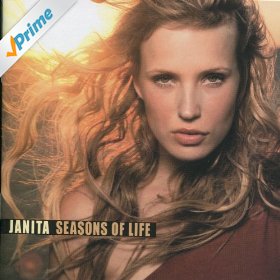 Seasons of Life is a 10-track/ 45-minute CD of Smooth Jazz excellence. The album’s most significant accomplishment is that it showcases Janita’s acute writing abilities. Indisputably, Seasons of Life is one of the most proliferated CDs released in recent years. Remaining faithful to the foundation of Smooth Jazz, Janita blends velvety spoonfuls of R&B with smoldering vocals – developing a sound uniquely her own. In addition, Seasons of Life serves as a platform for Janita to introduce to the American audience the style of rhythmic distinctiveness she created. Seasons of Life teases its listeners with hints of progressive tempo – perhaps a youthful reflection of the time this child prodigy once spent engrossed in the study of Rumba and Cha Cha.

Seasons of Life upholds Smooth Jazz’s charisma even as Janita skillfully presents her own poignant interpretation of this genre. For instance, in “I Only Want You”, Janita mixes Bop with her sensual singing – capturing the grace and sophistication perfected by Jazz greats Dianna Krall and Nora Jones. On the other hand, the album’s opening track, “No Words”, reflects the tropicalia metrical beat created by the Brazilian genius, Joao Gilberto, pioneer of the revolutionary musical form Bossa Nova.

A native of Finland, Janita had already been declared a teen singing phenomenon by the time she was 17. After releasing three highly acclaimed CDs in her homeland she moved to New York City in hopes of establishing herself as a composer, songwriter, and vocalist within the American music industry.

From the 1990’s to the early 2000’s, Janita released five albums in Finland, Europe, Japan, and in the U.S. Even though her fan base steadily grew in other markets, domestic sales continued to produce disappointing results. Possibly this is due to the fact that the 90’s produced an era of cookie-cutter type teen stars that did not really cater to the sophisticated style of this young talent. As the century turned, however, The Grammy Awards, the American Music Awards, and the MTV Awards repeatedly honored progressive songwriters such as Nora Jones, Alicia Keys, Jill Scott, Lauren Hill, and Erykah Badu. It was within this group of master storytellers Janita most identified. Subsequence to their commendations, the time had finally come for Janita to release Seasons of Life – the album that would finally grab America’s attention.

The obvious comparison between Janita’s “Seasons of Life” and India Arie’s “Acoustic Soul” cannot be avoided. Both performers exhibit a level seductive resonance few others attempt. With that being said, Janita remains in India’s shadow only briefly, as she masterfully puts together a collection filled with her own amalgamation of style, movement, and sound. In fact, Janita’s delightful tone offers the perfect pairing with Inniskillin Gold Aged Vidal. As does “Seasons of Life”, this Icewine captures the idyllic spirit of a sweet, balanced, yet fully flavored moment.