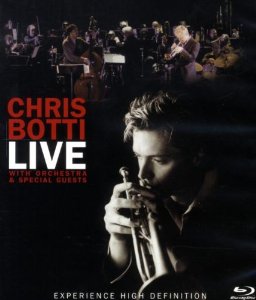 With the DVD release of Chris Botti Live: With Orchestra and Special Guests, Oregon’s favorite son succeeds in launching Pop Jazz to heights traditional pundits once declared as unattainable. In the follow-up to his 2005 gold-certified To Love Again, Grammy-nominated trumpeter Chris Botti clearly establishes himself as the unmistakable dominate force of Pop Jazz.

Botti shares the famed Wilshire Theatre stage in Los Angeles with the most revered musicians of the day: Sting, Jill Scott, Paula Cole, Burt Bacharach, Renee Olstead, Paul Buchanan, and Gladys Knight. Filmed December 2, 2005, these musical legends are joined by a 35-piece orchestra, as well as Botti’s own esteemed five-piece virtuosic band. From the first sound of Botti’s trumpet, to the final flicker of the theater’s lights, this sold-out performance was destined to be an evening of enchantment. While the concert only lasts a mere two and a half hours, the in-depth documentary preserves the concert’s lasting legacy as Pop Jazz’s defining moment.

Even though the concert was aired on PBS, the DVD features nearly an additional hour of pieces cut from the televised broadcast. Limited to the DVD includes a profile of Botti and members of his band. In addition, restricted to the DVD includes Sting’s appearance with Botti’s band in the remix of the Police classic, Message in a Bottle.

Previously named as one of People Magazine’s “50 Most Beautiful People,” Botti’s media exposure includes live concerts on both The Today Show, and The Oprah Winfrey Show. The result of these two concerts alone led to the largest increase of weekly sales of any jazz album recorded by an instrumental artist. Botti’s edgy mixture of classic and modern highlighted throughout the DVD settles once and for all the cultural influence of today’s Pop Jazz.

We suggest you pair this DVD with Bridgeview 2002 Blue Moon Merlot. Made from Oregon grapes, this 12.5% containing alcohol-deep reddish wine is comparable to another Oregon work of art -Botti himself. As with the DVD, this wine offers a striking appeal of smooth, full-bodied flavor and bright clarity. The dry taste offers a fresh acidity, as well as a hint of oak. Combined with earthy, fruity, spicy and woody aromas, this Merlot leaves the consumer with traces of berry and vanilla sure to delight – as does Chris Botti Live: With Orchestra and Special Guest.