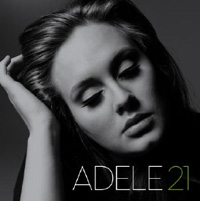 Adele effortlessly illustrates the pain of heartbreak and lost love through her sophomore album “21” (named for her age when it was written). The English singer-songwriter first gained recognition when her debut album “19” was released in 2008, which earned her Grammys for Best New Artist and Best Female Pop Vocal Performance. This follow-up album not only mixes the genres of soul, R&B and pop, but is also influenced by the sounds of blues and country music that she discovered while touring through the southern states. With the help of talented producers, such as Rick Rubin and Paul Epworth, Adele has created a passionate and dark sounding album, which empathizes her powerful vocals.

The first single off the album, “Rolling in the Deep,” is described as a “dark bluesy gospel disco tune” with heavy bass drum kicks and exuberant lyrics. “Rumor Has It” follows the track with the same foot stomping and hand clapping style. Piano dominating songs “Turning Tables,” “Someone Like You” and “Take It All” highlight the pain and agony in the soulful heartbroken signer.

“Someone Like You” is the closing ballad and the second single released in the UK. The Official Charts Company has revealed that it is the first single to sell over a million copies in the UK this decade. The second single released in the US (third in the UK), “Set Fire to the Rain,” is the most pop driven song on the album with fierce vocals and lyrics; achingly singing to her ex love to “let it burn.” Adele even gives a refreshing rendition of the Cure’s 1989 hit “Lovesong.” Each track on the album pours out soul and emotions through her compelling vocal expressions. It’s no surprise “21” is one of the top selling albums of 2011.

Dim the lights and turn up the music. Pair this timeless album with a bottle of the 2005 Chateau Rollan de By from Medoc, Bordeaux, France. Given 90 points by Wine Advocate, this pairing blends as smoothly as Adele’s voice. The full body of the wine and the spicy long finish is an exceptional match to her fiery passion and heart wrenching songs. Enjoy the perfume of berries, chocolate and vanilla and the blend of 70% Merlot, 10% Cabernet Sauvignon, 10% Cabernet Franc, and 10% Petit Verdot. With a glass of this Bordeaux red blend in hand let Adele show you the piercing sting of love with this awe-inspiring album.